Foley Youth Baseball was started in 2008 by a group of parents led by Dan Wennerberg with a mission to provide a safe, fun, and educational environment for the youth in our area. This organization is made up entirely of volunteers, many of whom work year-round to make sure the mission is carried out. We thank all parents, guardians, and players for all of the support in this mission! Read our full mission statement.

Time to Round the Bases!!
Online registration is open! 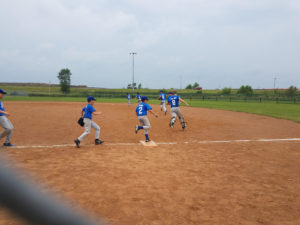 Foley Youth Baseball plays in the Central MN Community Baseball League (CMCBL) and the Gopher State League. The CMCBL includes children in grades 2 through 9 (ages 8-15). The Gopher State League teams, which are ages 12, 13, and 14 years old or grades 6 through 8, are picked based on evaluations that take place each fall. Both leagues play about 16 games starting the end of May, with the final tournaments in mid-July. Coaches reach out to the parents/guardians of their team in May to coordinate practice dates and times.

We also provide a Coach Pitch, non-competitive league for children in Kindergarten through grade 2  (ages 6-8). These teams practice and scrimmage against other Foley teams at the Foley school baseball fields. No traveling is necessary for the Coach Pitch league. This league starts in mid June and ends the end of July.

All leagues, except VFW, play games  in the evenings; usually around 6:00 pm. CMCBL and Gopher State League travel from Sartell to Pine City and go as far south as Rogers, MN with about half of the games being held at the Foley school baseball fields. Parents/guardians provide transportation to the games and practices.

For information about registration, uniforms, and equipment needed, please visit our Registration page.

With the help of our sponsors, parents, and guardians, Foley Youth Baseball has been a great success to the children and teens in our community. Please continue to support FYB by volunteering to coach, help out with baseball field maintenance, assist at tournaments, as well as bake sale fundraisers.

Get your name on some of the newest seats in town.  For $50 we will engrave your name onto a seat at the new varsity baseball field grandstand.  Your name will remain there for 3 years.  All proceeds will go towards the high school baseball program.  If you’re interested email Dean Dahmen   ddahmen@apps.isd51.org 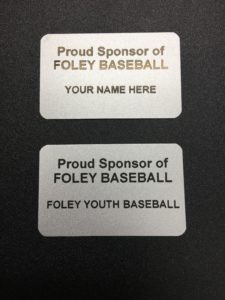